Leya was my “baby girl” for most of her life. She was even Miss Leya for a large part of her life. I adopted her in 2004 (I’m pretty sure that’s right.) when I came to visit Josh in Texas when I still lived in PA. A year or so later I moved to Texas (in June 2005).

Leya flew from Texas to central PA and then she drove from PA to Texas via the eastern half of Tennessee so we could visit family on the way. People on the flight found her utterly adorable. For those not up on their geography, we added a few hours to our trip because Tennessee is very wide. It seemed to take forever. Leya wasn’t named for Princess Leia, she was named for a person. I decided to give her name a different spelling, well because? Once she grew up, she was mini Leya as a kitten because she was so tiny but turned into a fat round cat. 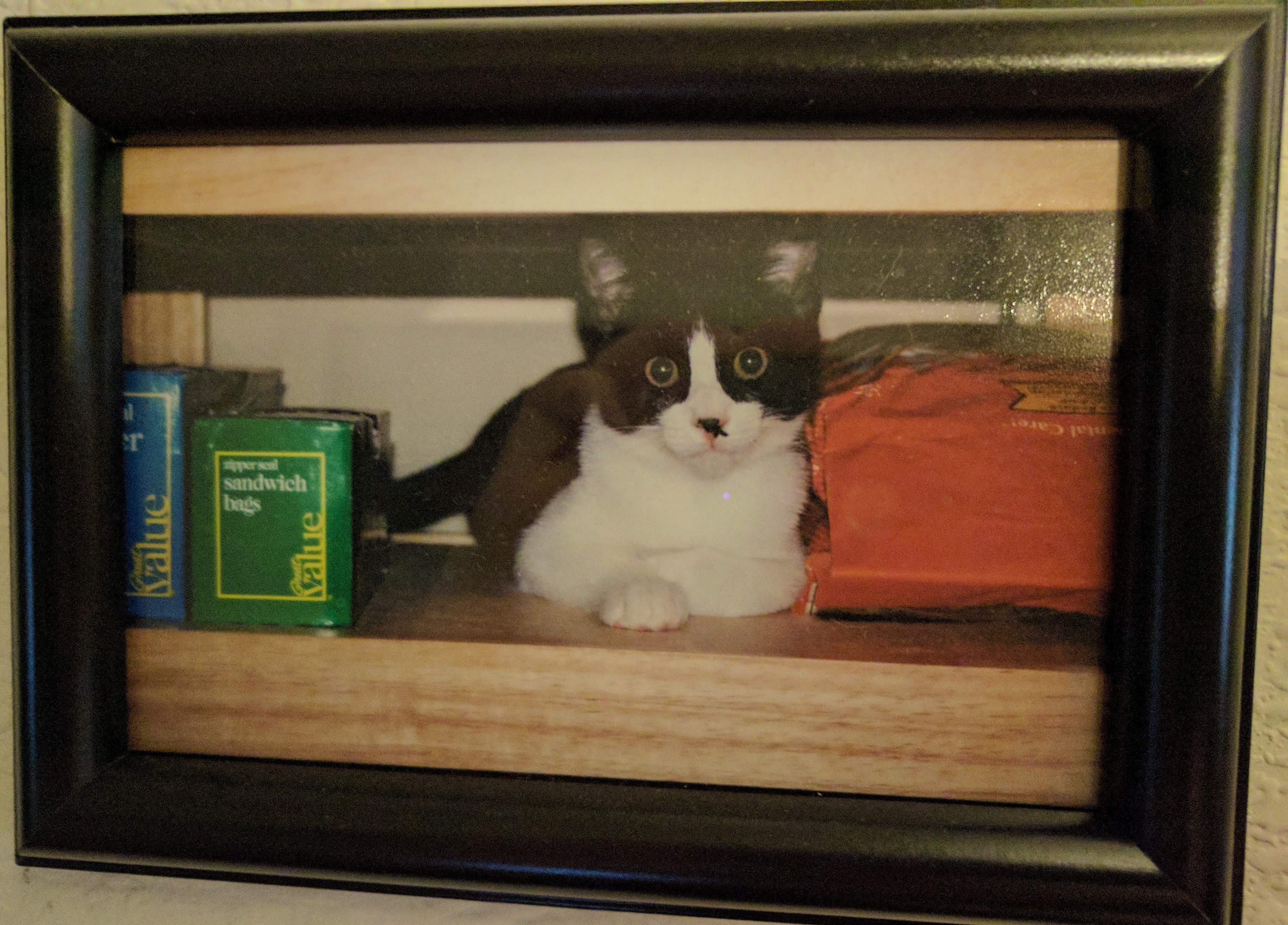 You’ll see she’s laying beside a box of sandwich bags.

She was a crazy little kitten and she’s probably provided me with emotional support all my life. She was always there When I was living alone I would occasionally come home to find that a certain kitten had lots of fun. Like the time she dragged a full paper towel roll down from the kitchen table. She must have chased it all around the kitchen. There was paper towels wrapped around the table legs. Next is the vicious Printer Beast. It’s attack power is judging you. This picture is at least a few years old. In her prime before she grew into an old lady, she was adept at getting somewhere so that you couldn’t ignore her, but she wasn’t aggressive about it compared to some of our other cats.

Leya dealt with a lot too. One of our cats used to chase her about and because of that she stress-ate. She had a period where she freaked out for awhile from something. We think something happened in the apartment complex we were living in at the time when we weren’t home and it was super traumatic for her. She used to hide when people showed up. She was always more comfortable around women than men. When I look back it’s really hard to tell how much she actually liked other cats. She used to run and hide at the first crack of thunder too. You always knew when the storms were gone when Leya emerged from under the bed. She had all her little quirks like any cat but she didn’t have quite as many nicknames. Her best nickname was probably Darth Vader. She had allergies most of her life and eventually developed fluid in her lungs and tried to turn into a bulldog with extra tissue around her mouth. She sounded quite a bit like Darth Vader. When she was older, at some point, she chilled out. Instead of hiding because people were here she searched for pets. She turned into an attention whore. A lot of these pictures are Leya quietly seeking attention.

Leya also had talons because I have never successfully taught a kitten to accept nail trimmings.

I’m sure this was accompanied with lots of purrs.

As you can see, Leya had trouble relaxing too. Based on the couch and the bookshelf arrangements, this picture was probably in the last year or so.

Grumpy looking cat would kill you with her mind. I adore this picture, so very much.

These past few years Leya provided me a lot of important emotional support. Every time I felt like shit there was a cat beside me, not judging, just being present. A purring cat really does have positive effects on your health. She was comfort in so many ways. Anxiety threatening a panic attack? She was there to purr for me. I miss her, deeply. She was here for almost 14 years of my life. Because she spent a lot of time actually with me, I seem to have a lot of pictures of her sleeping, waiting for belly rubs.

Cats are experts at hiding pain but you know how they feel by how they look in the eyes.

Until the last few months she spent 90% of the time that I was in the living room on the couch, on the living room with me. In the end she split her time with me and the heated bed, unless I laid out the other heating pad for her. Then she was happy, mostly. About six months ago we found a large lump on her neck. (However much lump you see on the outside? That’s how much lump is on the inside.) We didn’t know how long it had been there because she was not petted on her neck on a regular daily basis. Initially the lump seemed to be a cyst. I had a bad feeling. Then it was getting bigger, and harder. Around the new year she was getting worse, she had a big visit to the vet for blood work, to try to get the cyst smaller by removing fluids from it – which didn’t really work, and treatment for her UTI – which she’d never had in her life. She was slowly going downhill until the last week or so. In one week she went from not eating dry food to not being able to swallow anything solid. At this point it was beyond obvious that the lump was aggressive cancer and had grown behind her esophagus to the other side and so it meant she could not swallow. Fuck cancer, we lost two cats in six months. One to slow moving cancer, one to fast moving cancer. Fuck cancer. Losing two cats in such a short period has made it even harder for me to cope.

Leya loved her belly rubs, but only from her people. As she matured, her circle of people grew to also be regular visitors. She also loved her food. She was a sweet girl, even the vet thought so. She didn’t do the whole lap cat thing but one of her favorite things was to lay on the couch between Josh and I through dinner and then watching tv every night we ate at home. If she wasn’t already on the couch, she would show up to sit on the couch with us as soon as Josh sat down. Literally.

This video is actually quite a few years old based on the wall in the background. Regardless it seemed like a great way to end. You might need to turn up your sound.

One last tidbit to leave you with… Leya was very sensitive. If she wanted to join you on the couch and you didn’t invite her on to the couch with you after a few minutes, she would walk away, with her tail down. If you called her back, then she’d come trotting back, with her tail straight up, and join you. It was adorable.

Nerd, wife, knitter, writer, cat mom, and comic book reader w/masters of science in Applied Sociology. I have histamine intolerance, lots of food allergies and sensitivities - including gluten. And I have multiple sclerosis, fibromyalgia, asthma, drug allergies, and migraines. Then there's the PTSD, BPD, anxiety and depression. I look fine, but I have trouble getting stuck in my head. Too much going on to be able to work. View all posts by Histamine Queen